My kids love dumplings. Every time I make soup it is expected that I will make dumplings. For me it is a random thing, experimenting with different proportions, different flours, an add this, add that kind of thing. They always turn out different, but they are always a success.
I think my personal favorite is when they are made with semolina flour and when I incorporate cooked vegetables. What kind of vegetables? It depends on what kind of soup I am making. 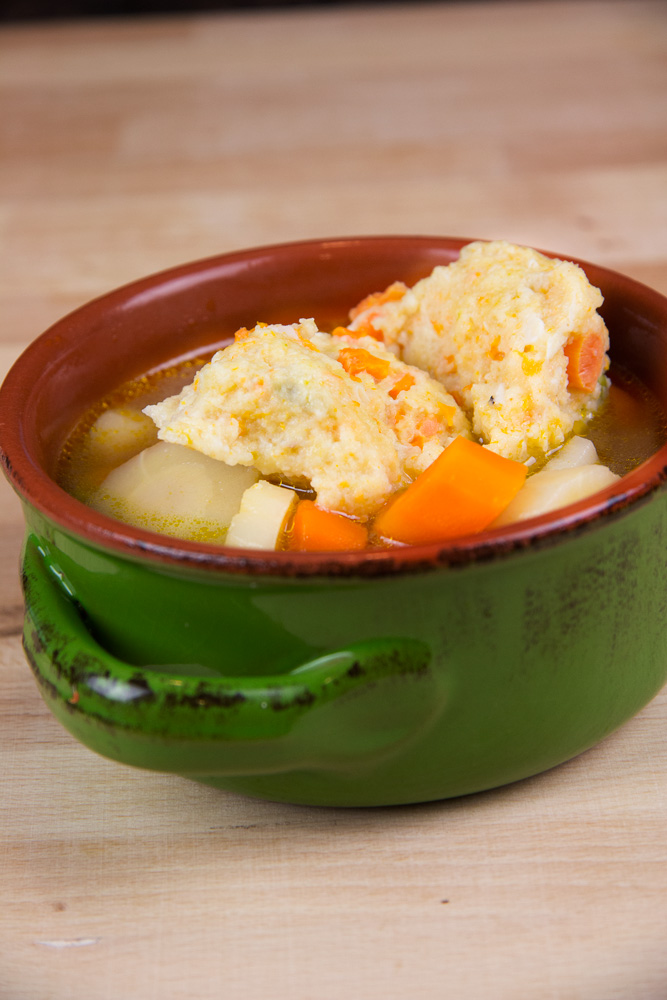 This time I was making my favorite Summer Pea Soup, so the candidates were cooked carrots, parsnips, celery root and peas. If you are making a different style soup, you can put your favorite things into them. Make sure you let us know how it turns out!

Posted at 21:20h in Main courses by Valerian 2 Comments

I love bryndzové halušky – little dumplings with cheese.  I already blogged about them when still living in Slovakia, but they are  something I really miss from my homeland. They are pretty straightforward to make them, except that you need bryndza. Bryndza is sheep cheese, which looks like ricotta but with a distinctive sheepy tangy flavor. Since I’ve never found bryndza here, making this dish in the US seemed impossible until I came across Pecorino Romano in the infamous Trader Joe’s.

Pecorino is a sheep cheese, which looks very much like young Grana Padano. It had been a long time since I tasted it, and although Pecorino is a harder cheese than bryndza, I decided to give it a try. I made halušky, which is a Slovak version of gnocchi and very very generously grated Pecorino over them. Then I added  rendered bacon fat and fried bacon and I felt like I’d gone to heaven. It worked. It is not exactly the same as making it with bryndza, mostly because bryndza would make the halušky creamy. If you feel like it, you can add 1 or 2 tablespoons of sour cream, that should do the trick. In other improvements from the last time we posted this recipe,  I made the halušky dough better with more potato flavor.

22 Nov Banana bread (not the kind you’re thinking of)

Posted at 12:31h in Breakfast, Snacks by Katy 3 Comments

When I hear “banana bread”, what comes to mind is the bake-sale staple, a quick bread that is more like a cake, really. So when I was at the library a couple of weeks ago and thumbing through a Jamie Oliver cookbook while the kids selected their easy readers, I was intrigued by a recipe for a standard white bread made with banana puree. END_OF_DOCUMENT_TOKEN_TO_BE_REPLACED

Posted at 09:46h in Main courses by Katy 3 Comments

So, a few months ago it was pancakes. Apparently now it’s eggplant sauce/spreads. But this recipe is actually one of my go-to dinners, even when eggplant and tomatoes aren’t busting out all over the farmers’ markets. When something is good, it’s good! END_OF_DOCUMENT_TOKEN_TO_BE_REPLACED

Posted at 17:33h in Main courses, Side dishes by Valerian 0 Comments

Some of you have been concerned that recent recipes have been too healthy and light. Well, fret no more, friends. This one suffers from no such delusions: it’s rich and oh my, it’s good. END_OF_DOCUMENT_TOKEN_TO_BE_REPLACED

SZIA,
We are Katy & Valerian, aka Emperor's Crumbs, in the SF Bay Area. We're taking on the challenge of balancing family, work and healthy eating, and we hope you'll join us!

Our Blog Featured In